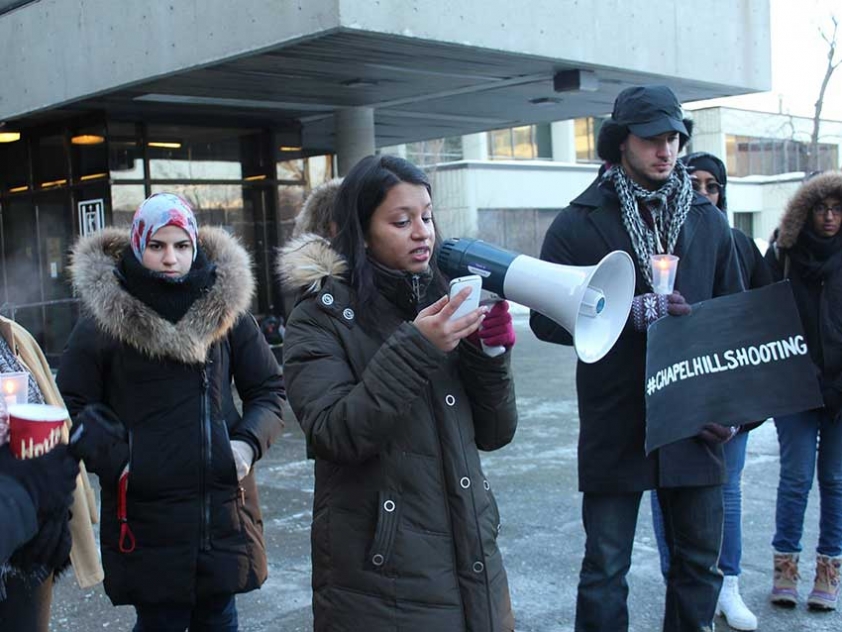 Tabitha Mirza speaking at the University of Ottawa Vigil for the victims of the Chapel Hill Shooting. Amer Adas
15
February
2015

Students gathered at the University of Ottawa on February 13th to pay tribute to the three victims of the Chapel Hill Shooting. Those present were invited to express their thoughts and feelings in relation to the tragedy. This led to reflections of the impact of Islamophobia on the lives of Muslims in Canada, particularly Muslim students.

Jawdat Saleh, a University of Ottawa Criminology student who co-organized the event, explained “Many students expressed feelings of fear saying things such as ‘that could have been any of us’, ‘Islamophobia is real and it exists even here on our campus’ and a girl shared a story of an encounter that she had at her CEGEP in Gatineau where she was subject to hate by another student due to her religion. Many students also spoke about the rise of hatred against Muslims all over the world.”

Tabitha Mirza, a University of Ottawa International Development student, was one of the students who spoke out about the reality of Islamophobia in Canada. “There was much talk about how it 'doesn't happen in Canada as much' but that is not true,” Mirza said, “Although, perhaps less Muslims are killed in hate crimes, the anti-Muslim sentiment is still the same and still prevalent in popular culture.”

Mirza shared with Muslim Link some Islamophobic postings to the University of Ottawa Graduating Class of 2018 Facebook Group. “The conversation that happened in the group after the War Memorial shooting should not have happened in that space, but perhaps it was just a reflection of other actual campus sentiments,” she explained, “I had made a post in the group responding to the micro and macro aggressions of quite a few people. The post has since been deleted since I was being threatened, told to go back to my country, and called a terrorist, but the comments were just generally quite distasteful and ignorant.”

The event was covered by both CBC and Radio Canada. University of Ottawa Professor Nadia Abu Zahra was invited as a guest speaker at the gathering.  According to Saleh she “stressed the importance of denouncing hate speech and hate crimes towards ALL RACES, RELIGIONS, [and] ETHNICITIES. She urged everyone to join the event that was taking place right after this vigil on the other end of campus in solidarity with the Aboriginal community to stand against violence to their women.”

Saleh agreed with the need to attend the other event, but also felt there was a need to focus on Islamophobia. “We are condemning hate crimes in general. Whether it's against a Jew, Muslim, Homosexual, etc. ,” he explained, “The reason why the "Muslim" idea was pushed so much was because it felt to many members of the Muslim community as if a crime that was done against Muslims was not worth the same denunciation as any other hate crime.”

Saleh feels that it is important to raise awareness about Islamophobia in Canada and particularly on campuses where some Canadians are interacting with Muslims for the first time. “I think everything--from a Facebook Post to a vigil--is a good way of raising awareness about Islamophobia on campus,” he explained, “It all makes a difference. However, we stress the importance of raising awareness is a loving and peaceful manner. Many people are ignorant, but I can only blame them so much. After all, their response is normal considering all the garbage they are fed daily through the news and movies like American Sniper. So many of these students come from tiny towns where they have never seen any kind of minority. The only thing they can refer to in order to build an opinion on Muslims is what they read in the papers.”

The commitment to community service of the three murdered students has been highlighted by mainstream media. It lead to Deah’s Crowdfunding Campaign for dental assistance for Syrian refugees in Turkey raising almost $500,000 when Deah had originally requested only $20,000. But Mirza felt concern about the focus on the victims’ achievements. At the event, Mirza stated “The fact that the family of Deah, Yusor, and Razan constantly have to portray them as upstanding citizens in order for their murders to be viewed as 'wrong' is disgusting. If they weren't dedicated to service and community, how much harder would it be for the public to be able to 'love' and mourn them? If they were problematic in any way, even an unpaid parking ticket several months prior, how would the media tarnish their reputations in order to protect their murderer?”

Saleh was also inspired by the victims’ community service, but added that “So many Muslim students that I know have identical resumes to the ones of the victims. Role models, straight-A students that spend countless hours volunteering and giving back to their communities. The victims were great individuals who were very loved by their community, and after the tragedy, they were used as a display of how American or Canadian Muslims contribute to their communities. It's beautiful that we're able to take the accomplishments of these individuals and say HEY, while you're so busy criticizing Muslims all the time, you're missing out on the gems of your communities like Deah Rezan and Yusor.”