Binish Ahmed is a PhD Candidate at Ryerson University. She received her MA in Public Policy from Brock University, and a BA Hon. with a major in Political Science, and double minors in History and South Asian Studies from University of Toronto (St George).

Her writings have appeared in Rabble, Feral Feminisms Journal, and has an upcoming peer reviewed piece in The Himalaya Journal's special issue on Kashmir. She works as a researcher, writer, educator, community connector, and artist. She is the founder and director of Kashmir Gulposh, a praxis hub and an intellectual / arts lab.

Her scholarship examines governance and policy issues critically at the municipal, provincial, trans-/national, as well international level, and places policy issues and questions within a critical multi-level governance framework.

Binish has taught at the Politics Department at Brock University and at Ryerson University’s Politics and Public Administration, Urban and Regional Planning, and Sociology.

She hails from Kashmir, and currently lives and works in Tkaronto, the Dish With One Spoon Wampum Belt Covenant territory, homelands of the Anishinaabek, Haudenosaunee, Mississaugas, Huron-Wendat, Petún First Nations and the Métis. Twitter @binishahmed 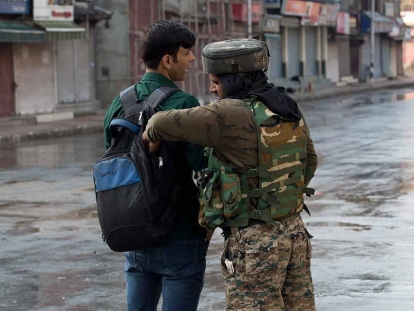 Call the crime in Kashmir by its name: Ongoing genocide

The Kashmir conflict, referred to as a “territorial dispute,” has been central to tense relations in Asia for more than 70 years, particularly between the two nuclear powers of India and Pakistan.