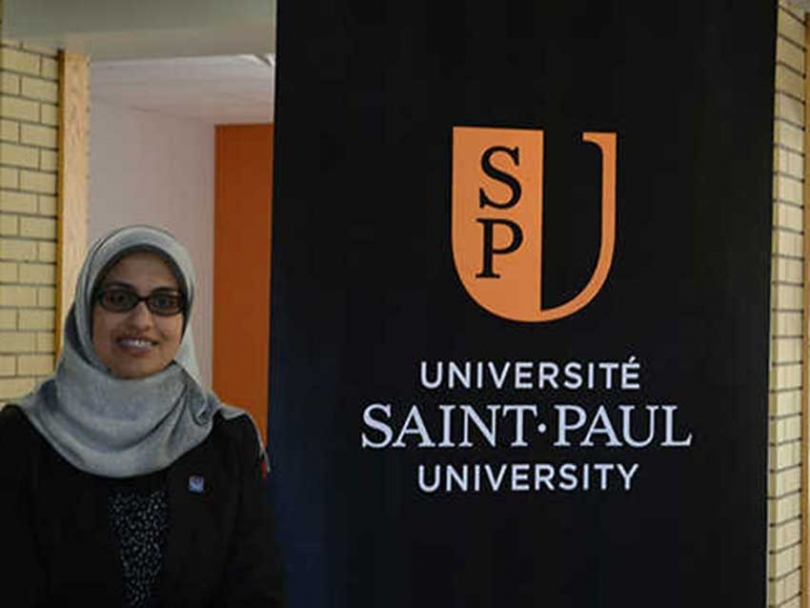 Assistant Professor in the School of Social Communications at Saint Paul University, this acclaimed academic has just been named to the Senate of this canonical Catholic university.  A visibly Muslim female professor appointed to the supreme decision making body of a Catholic, mostly French university in Ottawa is news of the kind that all citizens of the capital should be aware of, and applaud.

Founded in 1848 by Bishop Guigues of Bytown, this institution received university status in 1866 and was granted the pontifical charter by Pope Leo XIII in 1889.  In 1965, the province created the University of Ottawa and the two institutions became a federated complex.  After this amalgamation, Saint Paul retained both its civil and its canonical charters. A bilingual university, it concentrates on canon law, philosophy, theology, and most recently, the social sciences.

Dr. Dakroury feels no sense of dislocation here. In fact, she attended French Catholic schools in her native Egypt and finds the spirituality at Saint Paul just as soothing as she did as a schoolgirl. She is honoured by her historic appointment to the Senate and muses that it's rare to see a Muslim professor wearing the headscarf on campus;  the elevation to a policy making body of a Catholic institution of higher learning is precedent setting.

Armed with a BA from Cairo, she obtained her master's and doctoral degrees in communication studies from Carleton University in 2003 and 2008 respectively. She taught at the University of Ottawa and at Carleton and joined Saint Paul University in 2011.  Her brief tenure at Saint Paul before her Senate appointment lends her achievement greater lustre.

She is humbled but believes that in academia, the focus is “on competence, not on appearance”, and although she wears the hijab, has not been the target of any intolerance. Indeed, she's discussed the ethics of the Parti Quebecois' proposed Charter of Values through the prism of religious freedom, human rights and reasonable accommodation in her classes and relates that though a sizable body of the class and her colleagues hail from Gatineau, the atmosphere at Saint Paul remains serene and welcoming.

Her passions are many. Among them is her belief that mass media can be the key to empowering and emancipating millions of Muslims, especially women. Sadly, freedom of expression is a lofty, longed for right in most Muslim majority countries where government surveillance and circumscription of basic freedoms is the stark reality.

She finds meaning in her work as a scholar of human rights, who wants to “make visible those who are invisible in society”.  She holds that communication is an inalienable human right.

The notion of charity, in its most comprehensive, Catholic meaning informs her community work as volunteer principal in the Iqra Arabic School at Dar Assunnah Mosque, as well as her role in parent council at several Barrhaven schools. She volunteered in orphanages in Egypt as a child of twelve and believes that making a gift of our talents and resources is the essence of the fraternal love that Allah asks of us.

When asked about the barriers to leadership for women, her response is definite.  Powerful women are perceived negatively, both within and without the Muslim world. There is no prohibition on female leadership in Islam she declares, citing the accomplishments of Aisha, the wife of the Prophet (peace and blessings be upon him) among others.  Indeed, patriarchal interpretations have limited women for centuries while women's voices raised in dissent threaten vested male interests in various spheres.

But there is no obstacle that cannot be overcome. Dr. Dakroury espouses action. Volunteer, network, create circles within community,academia, and across cultures, and barriers will coming crashing down, she promises.

Awarded the 2011 Ontario Leading Women Building Communities Award, she revels in the study of Muslim philosophers and relaxes by swimming, biking and playing with children ”“ her own and others.

This is a woman who sets the bar high ”“ she inspires others to follow.