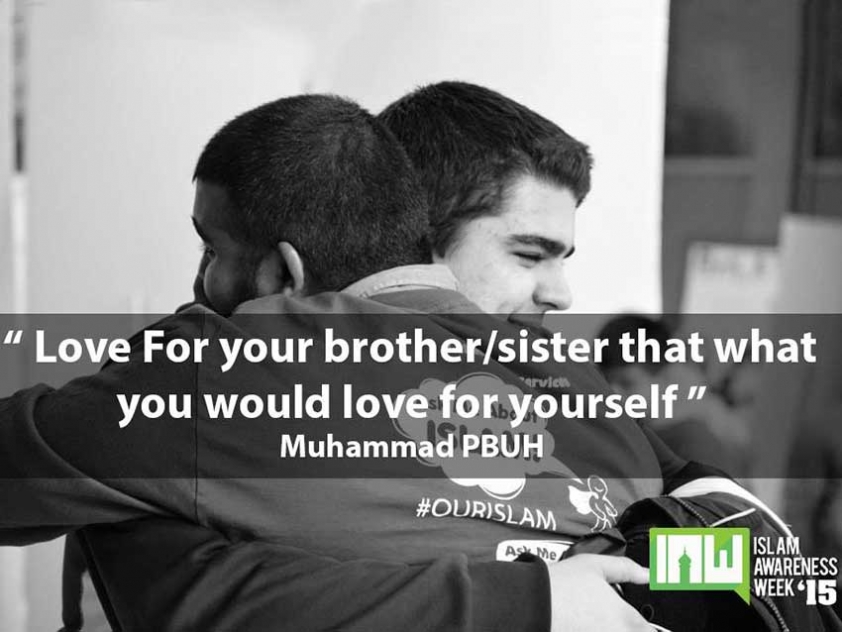 Why did you choose to take on the huge task of IAW at Carleton this year?

Amr Daouk: IAW is the biggest event the MSA has annually. It's probably even the biggest event on campus. This year especially, Islam has been under fire by a lot of people and a lot of media outlets and having IAW there to provide an environment to engage in conversations about Islam and to give us a chance to educate people is something that is absolutely crucial at this time. It's a platform to have people learn about Islam from Muslims and provide them with authentic resources to do extra research from and hopefully delete any misconceptions anyone might have of Islam.

Personally, Islam has been under fire by a lot and all I see are Muslims all around being apologetic. Their way of defending the religion is by saying these words everywhere, "This is not Islam". Instead of saying what Islam is not, I wanted to do something more, I wanted to show what Islam truly did say .This year has been my 5th IAW and it has been a major part of my life. I accepted being coordinator knowing that inshAllah this would be the best opportunity to display the true message of Islam.

Could you explain this year's theme and how you incorporated it into the week's activities and booths?

Amr Daouk: This year we chose the theme of Mercy. We wanted to show that everything we do in Islam lies under the umbrella of mercy. That leads us to our six main booths. 1- Mercy with the Soul: What is the soul and why should we be merciful with it and with ourselves? 2- Mercy with knowledge: Why should we attain knowledge? How is it a mercy to have knowledge? 3- Mercy with mankind: How are we supposed to treat people no matter what our relationship with them is? 4- Mercy with creation: Mercy with the environment that's around us which also includes animate and inanimate objects 5- Mercy with inner peace: Talks about the inner struggles that people go through and touches upon the importance of mental and spiritual health 6- Mercy with outer peace: Talks about social justice and human rights.

Radiyah Chowdhury:  These six booths touched upon every aspect of our lives as human beings and explained how Islam provides the blueprint by which we are to deal with these matters in a way that is merciful both externally and internally.

Would you agree that IAW is not only a great time to connect with non-Muslims on campus but also helps many Muslims who might not know about the MSA, learn about it?

Amr Daouk: I would definitely agree with that. A lot of the volunteers who signed up may have not known about the MSA and all the services they provide. IAW provides a platform for the volunteers to grow into this beautiful family and it strengthens their connection with their religion and revitalizes their faith. It's something that we all get to experience and one of the reasons why IAW is our favorite time of the year.

Radiyah Chowdhury: Islam Awareness Week's goal is very simple: To provide an enriching and welcoming environment in which people are comfortable to come and speak openly about Islam and its teachings. It's a great time to connect with everyone. We have many non-Muslims who come by of course, but we also have a lot of Muslims who wander through and share with us their own personal stories of faith. The beautiful thing about the week is that it allows us to connect with ourselves, too. Though the event is run by the MSA and we had an MSA table present for anyone who wished to learn more about it, we focus primarily on the theme and message of Islam throughout the week as opposed to any promotional material for the association itself.

What were some highlights of this year's IAW for you?

Radiyah Chowdhury: As coordinator, being able to witness stories unfold before my eyes was incredible. I saw so much growth in our volunteers and felt the love every day from these people who had quickly become my family. We have a closing session at the end of each day where we debrief and share stories of the day, and I always looked forward to hearing about the interesting tales people had to tell from their discussions with those who passed through. - Everytime someone was welcomed, whether it be at our displays, at the henna table or while we did an activity like "Tea with a Muslim", I knew we were doing something right. Everytime someone shared their story or said they learned something new, I knew we were doing something important.

Amr Daouk: It's seeing the family that the volunteers built with each other. Even though most of them didn't know each other in the beginning but at the end you would see that they have all bonded over something much bigger than all of them.

Tell us about the Quran Booth, were people reading from the Quran and Hadith throughout the day?

Radiyah Chowdhury: We scheduled Quran recitations periodically throughout each day and it was pretty incredible, being able to hear Quran in the middle of the atrium, an area always highly concentrated with people going from one place to the other.

Amr Daouk: The Quran booth is where people would pass by and pick up a free copy of the Quran in different languages for them to read. They would also engage in conversation with the volunteers at that table and discuss the Quran further. Let's just say that every day the volunteers at that table would come to me and say we're having a shortage of Qurans and we need more. MashAllah, a lot of people would come up, see the Quran and want to take a copy in order to read more into it. It was a magnificent scene.

How were you able to get on Rogers TV and how was the experience? Why do you feel it was important to promote IAW in a forum outside of Carleton?

Amr Daouk: One of our volunteers also volunteers for Rogers TV and she told Derick Fage about IAW and he was very interested in having us on the show to talk more about it. That interview reached a lot of people not only in Canada but around the world. People started messaging us from everywhere telling us how they're happy that IAW is happening and how important it is for such an event like this to exist in the current times. Promoting IAW outside of Carleton allows more people to visit from around Ottawa. The more people who come, the more conversations we can have and the more educated people can be about Islam.

What advice would you give to any future IAW coordinators?

Radiyah Chowdhury: Always renew your intentions. You will be tested time and time again over the months of planning it takes to pull off an event as large as this one. There will be times you'll want to quit or find a dark cave someplace you can escape the seemingly never-ending barrage of emails or texts. But I can't even really begin to say how much this experience will change you for the better, or how you'll feel on the final day when you realize how much of an impact you and your team were able to have. Everything will be worth it, God willing. So keep renewing your intentions and try not to sweat the small stuff.