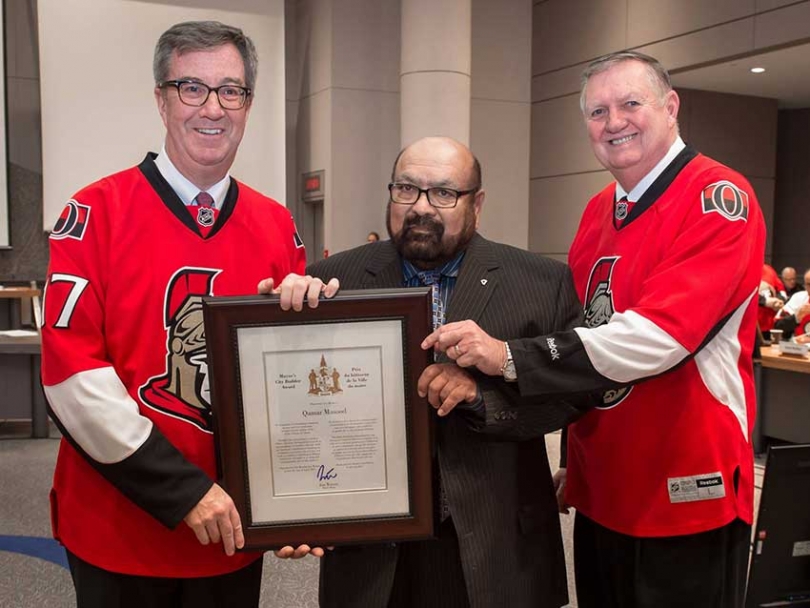 Written by  City of Ottawa Writer
Published in News

As a committed volunteer within the Pakistani community for over 20 years, Qamar Masood was presented the Mayor’s City Builder Award on April 26, at a City Council meeting by Mayor Jim Watson and Orléans Ward Councillor Bob Monette.

Qamar Masood is President of the Multicultural Association of Orléans, an organization that facilitates the participation of the community in socio-cultural, education and intercommunity programs. He is a former Ambassador of Peace within the Universal Peace Federation and was the longest serving President for the Canada-Pakistan Association of the National Capital Region. He also sits on the RCMP Outreach Multi-ethnic Committee of Ottawa and is involved in fundraising efforts for the Masjid Bilal Mosque. Mr. Masood donated his catering services to the fundrasiser roast of Deputy Mayor and Councillor Bob Monette where all proceeds were donated to the preservation of St. Joseph Church.

Qamar Masood advocates on behalf of the multicultural community of Orléans on matters affecting rights, interests and values that are consistent with the mainstream community. He has developed and promoted programs that focus on advancing education as well as social and culturally relevant attributes of the families that make up the community of Orléans. He has also raised awareness of the importance of giving back to our communities which is the continuation of the work he has been doing since 1993 on his Rogers Television show called Projection Pakistan.

The Mayor’s City Builder Award is a civic honour created to recognize an individual, group or organization that has, through outstanding volunteerism or exemplary action, demonstrated an extraordinary commitment to making our city a better place today and for the future. This may include lifelong service, outstanding acts of kindness, inspiring charitable work, community building or other exemplary achievements.

Individuals, groups or organizations may be nominated by members of City Council or the public.

The award is presented at the beginning of each City Council meeting.