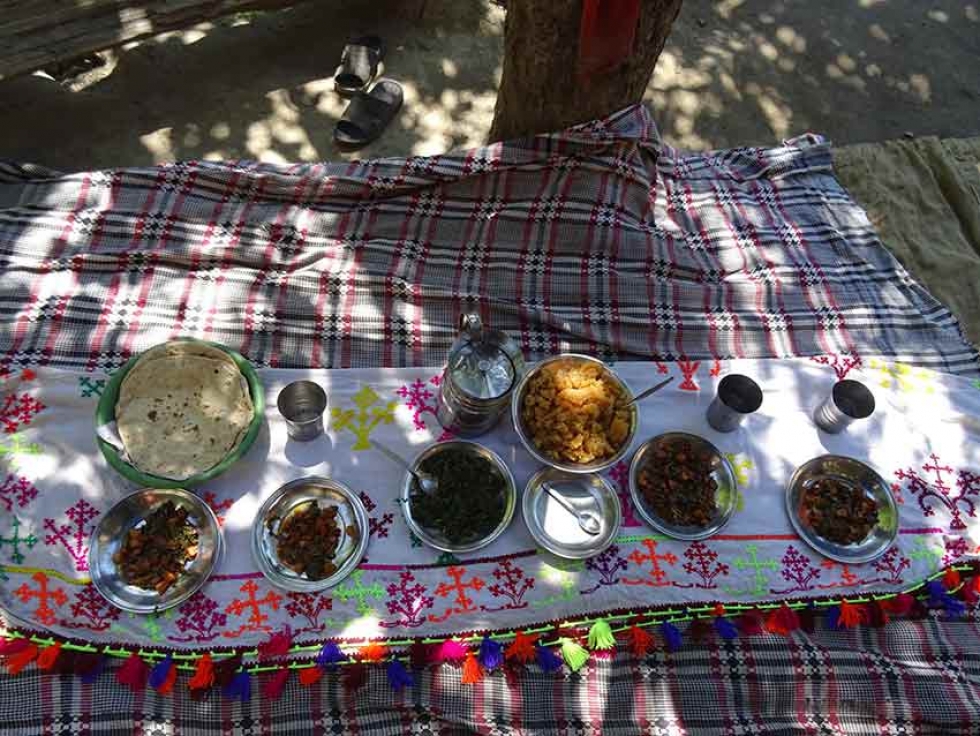 Meal-time in Kashmir is a time of dialogue. Omer Aijazi
20
Aug
2019

How to be an ally with Kashmir: War stories from the kitchen

The revocation of Kashmir’s special status has left many across the region outraged.

As Kashmiris are confronted with a new era of settler colonialism, we must take a stand against the violence. This is the time to once and for all forge solidarities with the people of Kashmir.

Given the history of betrayals in Kashmir, it is not adequate to only think in terms of geopolitics, although these are important considerations. We must also begin to nurture ideas of reparation for the Kashmiri people who have lived under military occupation for decades.

As a critical anthropologist, former humanitarian worker and also a Pakistani-Canadian, I have conducted ethnography in Pakistan-administered-Kashmir since 2014. I have spent time with numerous communities along the militarized Line of Control, the de facto border that divides Kashmir into Pakistan and India.

Pakistan and India, both nuclear powers, have fought three times over Kashmir. In early 2019, they once again came dangerously close to war.

As the most recent spectre of war looms over South Asia, I would like to share some of the lessons I have learned on allyship.

Allyship is about listening, unlearning and accepting discomfort.

Allies need to listen deeply and centre the voices of Kashmiris. This should not be an excuse to posture what sociologist Nosheen Ali calls “Pakistan’s saviour nationalism.”

Surprisingly, most of my insights on allyship come from the kitchen. The kitchen is a revelatory space. The authors of the documentary cookbook The Gaza Kitchen call it a “a visit to the intimate everyday spaces which never appear in the news.” This is where the contours of close relationships are adjusted. It is a place of undoing, which can generate as much discomfort and instability as warmth and sustenance.

The kitchen is another site where women exert their power in the everyday, challenging stereotypes of their lack of participation in Kashmir’s political and social life.

An invitation to a meal is trust

Food connects people. In the mountainscapes, during the grazing season, people turn extra milk into ghee (clarified butter). Kashmiris then distribute the ghee to neighbours and friends to strengthen social ties and express solidarity with one another.

An invitation to a Kashmiri kitchen is based on trust. It means access to the inner dynamics and workings of a household. One host remarked:

“We don’t let just anyone enter our kitchens.”

I was permitted into the kitchens after months of difficult conversations. These conversations helped me to recognize my complicity with the oppression of the Kashmiri people.

Food is pride and culture

Food and its preparation reflect care, pride and a sense of attachment to the land. During my time in Kashmir, people often went out of their way to prepare dishes that were made from hyper-local vegetables and mushrooms.

One of my generous hosts spent six hours preparing a sweet made from rice, meticulously ground down by hand; another host cooked from a recipe inherited from her grandmother. These were recipes that have been passed down from family members who lived long before the violent Partition of the Indian Subcontient that also splintered Kashmir into two. It is important to remember that Kashmir exceeds the histories of Pakistan and India.

Central to Kashmiri resistance and resurgence remains the right to publicly assert their political and cultural identities.

In Pakistan-administered Kashmir, the avenues for this are scarce. A great deal of vigilance has to be exercised by Kashmiris as they risk being charged for disloyalty and even treason. I have witnessed the carefulness that goes into organizing mundane events such as debating competitions and poetry readings. These events provide modest opportunities for the unapologetic celebration of being Kashmiri.

If Pakistan (and India) want to continue to host Kashmir — until more strides are taken for its complete sovereignty — perhaps we need to rethink our notion of hospitality.

Meal-time is an invitation to dialogue

Initially, I felt strange accepting invitations for lunch or dinner, especially in the space of such constraint and limited resources. But I realized these were invitations for dialogue outside of formal research practice in “unstructured time.” These were opportunities to learn other rules of engagement.

The recent removal of Kashmir’s special status in India has made it clear that the nation-state remains an unjust and unreliable adjudicator of Kashmiri life. The overturn tries to force conscription of Kashmiris into the Indian state. There are no guarantees that sometime in the future, Pakistan will not do the same.

The language of Kashmir’s sovereignty must remain in constant circulation as well as efforts to work towards it. It must be arrived at through internal dialogue, experimentation and consensus.

This will most likely be a process of trial and error, culminations of incremental successes and small failures. At the same time, we must remain vigilant. Colonialism will continually increase in sophistication, and devise more exacting ways to assimilate, usurp, distract or annihilate. In response, we must be ready to work towards more radical forms of hospitality.

Social justice for Kashmir cannot be separated from other regional struggles, such as those in Balochistan and Waziristan or Assam in India’s northeast.

Colonial tactics insist on separation and disconnectedness: self from self and self from others. We must insist otherwise.

Allyship need not be oriented towards finite solutions. The work for Kashmir’s sovereignty will most likely outlive our generation — our strengths, commitments, loyalties and imaginations. Just like the perils of cooking on an open fire, where success is not always guaranteed, we must be willing to stumble, fall and hurt.

This means we must create our own ethics of care and measures of success. In our ally-relationships, we are judged for our complicity, silence and inaction not for the apparent failures or slowness of our efforts.

[ You’re smart and curious about the world. So are The Conversation’s authors and editors. You can read us daily by subscribing to our newsletter. ]

Omer Aijazi is a Postdoctoral Research Fellow at the University of Toronto (Religion and Anthropology).

He examines social repair and violence in the mountainscapes of Kashmir and its continuity with Northern Pakistan.