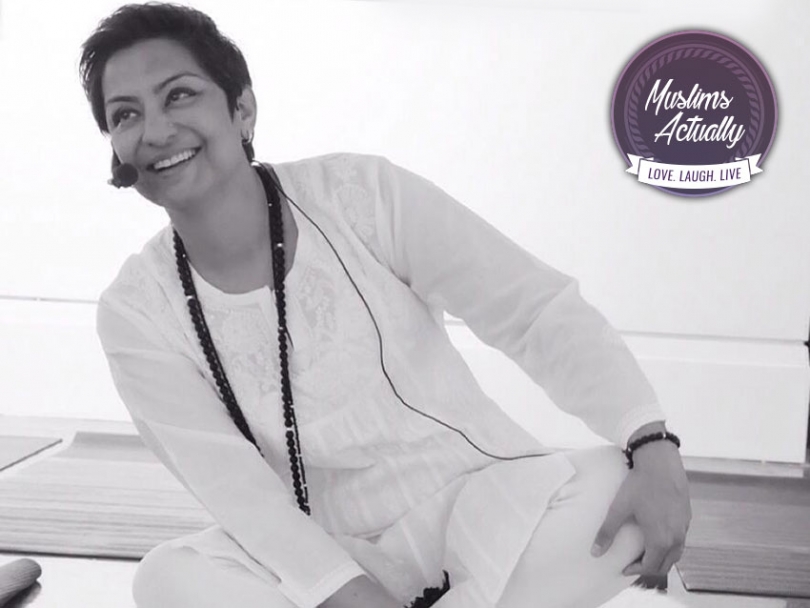 Interview with Salimah Kassim-Lakha, founder and director of YogaVision
02
January
2017

Excerpts from a Mindful Conversation with Salimah Kassim-Lakha, founder and director of YogaVision, by writer Saima S. Hussain

It’s not every day that you sit down for an hour-long conversation with a person, but walk away feeling as if you have read an entire book. The first time I met Salimah was in 2012 at a screening of the Academy Award-winning documentarySaving Facein downtown Toronto.  Dressed in a dark business suit, she was busily punching the keys on her Blackberry phone.  Now, three years later, when I walked into her yoga studio, she greeted me dressed all in white. White tunic and white pants, no smartphone but there was a string of prayer beads looped casually around her neck. I was eager to learn about the journey that had led her to YogaVision.

“I was born in Nairobi, Kenya. My family first arrived in Kenya from India in the late 1800s so I was the fifth generation to be born there.  When I was four years old we moved to Canada.  Since then I have visited both India and Pakistan. “

“I attended McGill University. That’s where my real growing up took place, outside of the family. Toronto and Montreal are really not comparable. Montreal has an old world charm.  It’s a lovely university town. At the time I was there it was more English-speaking, more relaxed and easygoing. Not so determined to be francophone as it is today.”

“I used to work for the province of Ontario in Pensions. I began working there in 1999 and I loved it in the beginning. I also did some marketing and sales in California and New York for the family business.”

“In 2004 just over 10 years ago I was involved in a collision. An R. Kelly song had started to play on the radio and I looked down for just a second to switch stations. The next thing I knew I had rear-ended the car in front of me. My own car was completely wrecked.  The fact that I was able to walk away from it alive was a big wake-up call. The reality is that life is short so we need to make it impactful.

“I dealt with fear and guilt for a long time afterwards. The woman in the other car was a dancer and she had a performance at end of the week.  My injuries led me to yoga and pilates for my back.  A friend was planning to go Kensington Market for a yoga class. She insisted I come with her. I was hesitant because I thought it would be a putting my legs over my head sort of thing.

“In the end I went to that class, and more in the weeks that followed. At the end of each class my teacher spent a few minutes doing meditation which was truly magical.  This was it I realized.  No more drama; the life I’m living is chaotic. I knew there was a better way of being in the world and if I don’t do something with my life I won’t reach my potential.”

“About a year later my teacher said I want to speak with you. She said that it was time for me to take yoga more seriously. I told her I already do it four or five times a week. She said it’s time for you to teach. How I asked, I don’t know all the postures. Yoga has nothing to do with postures, she said, it’s an experience with energy.”

“Yoga was my first love and it introduced me to all my other loves: my partner, my friends, my business, my understanding of my soul, my spirit. The more I commit to it the more things open up. When I started Yoga Vision about a year ago, It’s location on Mississauga’s Financial Drive amid corporate buildings was not deliberate but it has all worked out so well. I have just been very lucky because I really have no business acumen.”

“Take for instance cold calling. Don’t call during lunch hour, I was told. Don’t call on Fridays, I was told. I called during lunch hour on a Friday and got business. I know and I believe that angels are guiding me; they are helping me to connect. Sometimes I doubt this whole enterprise; what was I thinking I ask myself. But then I teach a class or a speaking opportunity comes or a student reveals something in class. That’s when I know I am meant to be here. “

“Walk every day. Meditate every day. Practice yoga every day.  Fifteen minutes of meditation is essential every single day.”  But if someone prays five times a day do they still need to meditate, I wondered out loud.  “Meditation is different from prayer. Prayer is talking to God or a higher entity. Meditation is listening to God.  Silence is connecting to God matter. We already have all the answers, it’s all within us. Meditation helps us to reach those answers.”

How would one know it’s not fear or guilt talking, I wanted to know.  “You need silence to know the difference. Sitting down is not the only way. Walking, washing dishes, any time is good to meditate. Hands can be busy, but still your mind and let it free. Once your natural mind becomes quiet, your creative mind will be woken up. “

“My family was very cool with my decision to become involved with yoga full time. Any opposition I met was within my own self. At the jamaat khana (prayer hall for Ismaili Muslims) I was used to saying salawaat (special prayers) and praying in Arabic. Would chanting mantras in Sanskrit mean that I am no longer a Muslim?” I had to laugh out loud at this because that is exactly what I think about every time I am on a yoga mat. Om, Allah, God, it’s all the same, right?

“Love, pyaar, amore are all different names for the same thing.  Shakespeare said that a rose by any other name is still a rose.  The fact is that I became more focused in the jamaat khana and also more invested. I understood the power behind it; I was no longer just completing the motions I grew up doing. Now I understood. “

Tell me about Laughter Yoga, I requested.  “Any one at any age can do Yoga. There is a misconception that it’s only for those who are young, strong and flexible. People actually believe that. I believe that Laughter Yoga has something to offer everyone. If we can create laughter; we can actually create joy. I now look for friends who laugh. I go where there is fun.”

“But while I was undergoing training for it I was miserable. I was eating sugar like it was going out of style. I was miserable because I was realising how I was not allowing myself to be happy. Can I even relate to this? I had been in a muted state for so long. Was I depressed or an addict I couldn’t even hazard to guess which one. I started to ask myself what I can do differently to shift how I feel.  I had to put together a plan for myself. Hate and fear are very damaging, and hate is actually fear. The key is to look towards our own selves with love. “

“Everything is divinely guided. I quit the job I had held for 15 years and within a month everything was in place. It was as if those 15 years had been necessary to teach me something. Those 15 years were necessary because they made everything that I have now more meaningful. Some things cannot be forced; we have to arrive at them at an ordained time. And experience tells us that everything falls into place at just the right time.”

“I have been asked why I chose to invest in a store front when this could easily be a business run from a home office. It’s because we are building a community, bringing people together. I like talking about spirituality. What is our purpose? At least 90% of yoga is done off the mat. Yoga is the ancient way of self-development. It’s the oldest way in the world. It’s not just about moving the body, but moving it consciously in concert with breath. It’s so simple. And so beautiful.”