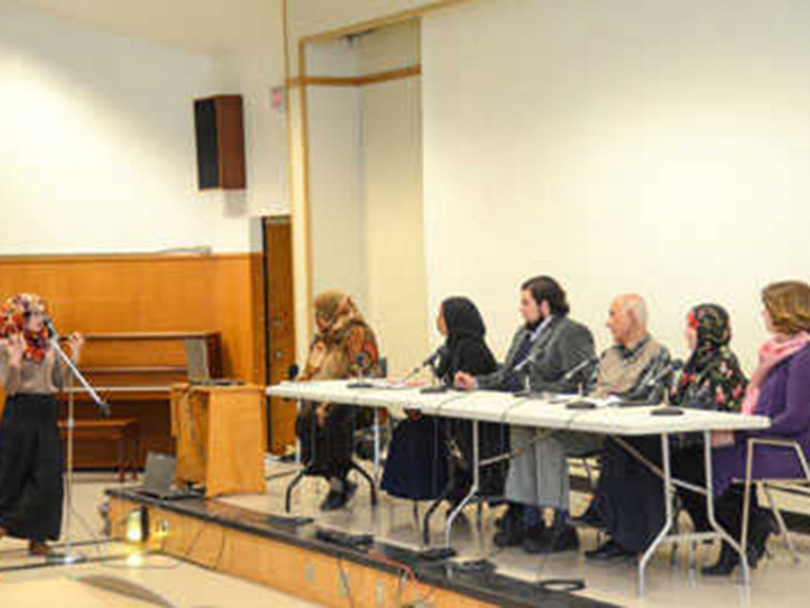 While the crowd was small, the sentiments of support were strong from contributors and readers alike. After a short slide show chronicling the paper's evolution from a simple two-page newsletter to the 12-16 page newspaper it is today, a broad panel of contributors and observers discussed the paper's importance as it enters a second decade.

Louisa Taylor, a senior reporter at theOttawa Citizen, told the audience that she considered the Muslim Link uniquely placed to tell the community's stories.  Mainstream newspapers like the Ottawa Citizen are struggling just to stay afloat in a media environment where people want to access free news online, she explained. That means that reflecting the city's diversity is not high on the priority list.

Indeed, asthe Muslim Link looks to the future, expanding its online presence would be one way to attract more young people to reading and contributing to the paper, suggested another panelist, poet and activist Sarah Musa. Ms. Musa was also the focus of a short documentary screened at the end of the evening by local filmmaker Atiya Hussein.

The newspaper has explored youth issues over the years, in fact dedicating at least one issue to the topic in 2005. However,  Dr. Monia Mazigh said she didn't think enough young people were interested in its content, though her own teenage daughter Baraa Arar said she reads the paper regularly.

“I'm just not sure that the issues that young people are facing are represented in the paper,” said Dr. Mazigh. She added that it would help bridge generational divides to explore the everyday issues that Muslim youth are facing in their lives and which their parents would otherwise know very little about.

Other panelists included Mohammed Azhar Ali Khan, a journalist and former refugee judge, and Omar Mahfoudhi, a passionate environmentalist and the executive-director at the Islam Care Centre.

Both of them enthused about the paper's importance, and hoped to see the paper continue to thrive and grow. For Mr. Khan, capturing the community's stories is critical to holding on to the history from generation to generation.

Mr. Mahfoudhi's hopes were to see a greater variety of stories on critical issues facing the entire community. He lauded the paper for its efforts to shine a light on the “quiet stories” in the community, including the problem of Muslims in prison, and issues about domestic violence.

Chelby Marie Daigle, the paper's coordinator and the afternoon's moderator, shared her vision for the paper's future as well, saying she hoped it would continue to articulate the community's various issues, but more importantly, that the Muslim Link would not shy away from controversial topics.

“The whole reason I started reading the paper was because the editor asked me to write about Black history,” she explained. “I wrote some controversial things and I didn't think the paper would publish it, but it did.”

Audience member and community activist Dr. Farrukh Faruqui got up to share her thoughts in the Q & A session. She said she hoped the paper would continue to cover controversial topics, and be more representative of all the various elements of the community, in all of its diversity.

Sakina Bint Erik Marx, a longtime contributor and columnist, said she has been surprised by some of the negative feedback she got from fellow Muslims who didn't like some of the things converts had to say in her monthly column, “Towards the Light”.

“But I think we all have to listen to these viewpoints,” she said to the panel and to the audience, asking everyone to encourage converts to write for the paper, “so that we continue to hear their stories.”

Amira Elghawaby, the event's MC and a past editor, also paid tribute to the paper's founders, one of whom continues to support the paper financially, as well as all the people who have made the paper what it is, often spending hours of their own time writing, editing, or laying out the paper.

“It's hard to believe that the paper has lasted this long,” she said. “It's been a work of heart and I hope it continues for a long time. It can with the community's support.”

Dr. Aliaa Dakroury, Assistant Professor at Saint Paul University's Social Communication Program and the co-sponsor of the event, thanked everyone for attending and said she was very pleased to have been able to help host the Muslim Link's celebration at the university, which is very welcoming of diverse faith communities. She also took the opportunity to announce the launch of a new program at the university which will explore the three Abrahamic faiths, scheduled for the fall.

The symbolism of hosting the Muslim Link celebration in a Catholic institution was significant said Ms. Daigle because she believes the Muslim Link should not just be about telling our stories in isolation, but as part of a larger community.

To see the slide show, or read through past issues of the paper, visit www.muslimlink.ca