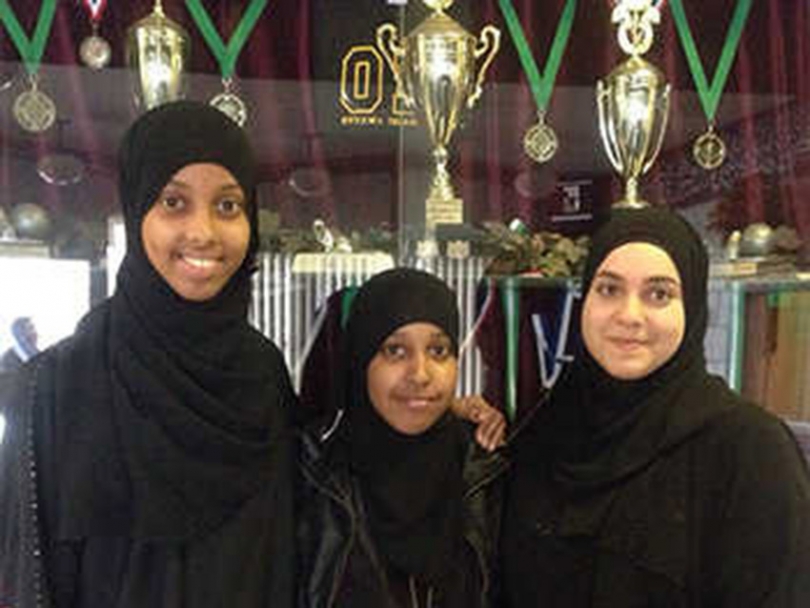 Deka Arab, Sarah Hussain, and Fatima Kabeli have made it to the finals of PeaceMidan's 320Reality Contest
06
Dec
2013

“Kids have power too”, stated Deka Arab, a 16 year old student at Ottawa Islamic School. Deka and her fellow students Sarah Hussain, 16, and Fatima Kabeli, 17, drafted the proposal for the “Light the Path” project, which has made it to the final round of PeaceMidan's 320Reality Contest. The contest invited people from around the world to submit their ideas for projects that could address the social challenges facing countries in the Middle East. Contest winners will receive $35,000 US as well as expert support to make their project a reality.

Sarah and Deka knew they wanted to inspire girls like themselves in the Middle East to become leaders for girls' access to education in their communities. They went to their Social Studies teacher Sadia Jama for help. “I told them that they wouldn't be getting any extra credit for doing this but when I saw that they were really in just to have a chance to make a difference I gave them my full support,” explained Sadia. This support included bringing in fellow Ottawa Islamic School teachers Deka Omar and Reem Kamal to work with the girls to develop their ideas into a coherent project proposal. The result was “Light the Path”, a week-long leadership institute which brings together women leaders from the Middle East and other parts of the world. Its goal is to guide aspiring young female leaders in building the knowledge and skills they need to develop an innovative, culturally sensitive, and sustainable campaign to tackle an issue in their respective communities. The institute would also provide on-going support to the participants with their campaigns in order to ensure lasting change.

The project was submitted to the first round of 320Reality where people from around the world voted on the video they had created with the help of local videographer Faisa Omer. “Light the Path” impressed the contest's panel of judges tremendously. Dr. Shima Barakat, a research and teaching fellow at the University of Cambridge's Centre for Entrepreneurial Learning (CFEL) stated “[T]he world needs more of the likes of this project to help girls, societies, and the world at large. Project impact on a small group of people but ripple effect possibly very high especially if the project is sustained and reaches out to more and more girls and women.”

Fellow student Fatima Kabeli soon joined the “Light the Path” team and helped them move forward after they made it to the second round. The girls worked together to develop a budget and coordinate the logistics for how their project could actually be implemented. Here the girls ran into challenges as they had to commit their time and learn how to work through differences of opinion. “This past summer, besides working, this was my second job,” Deka explained. The girls feel that the Islamic values of patience, cooperation, and mutual respect helped them through this difficult period. In October, the girls were notified that they were one of only ten finalists heading to a forum in early 2014 where they would pitch their project in person to the panel of judges.

Each girl feels that youth have the power to make positive social change in their societies because of their unique experiences, perspectives, and access to technology. “When we see something wrong we address it right away and we don't really care about outside factors, like what other people might think or your culture or how you've been raised ”˜cause we are still young, so we are more open-minded. We haven't been conditioned by society,” stated Sarah. “I personally care very much about tradition, but that means I respect other people's traditions too. Growing up in Ottawa it is very multicultural and we have friends from different cultures so we learn about them,” Fatima shared. “We are part of a generation where there is a movement going on. You can find out about things on the internet and you can make a difference, even just by making a video and telling a story and it can go viral and everyone will know about it,” Deka explained. {sidebar id=46}

Even if they do not win the contest, the girls feel the knowledge and skills they developed over the course of the contest will stand them in good stead as they continue to be agents of change in their communities.