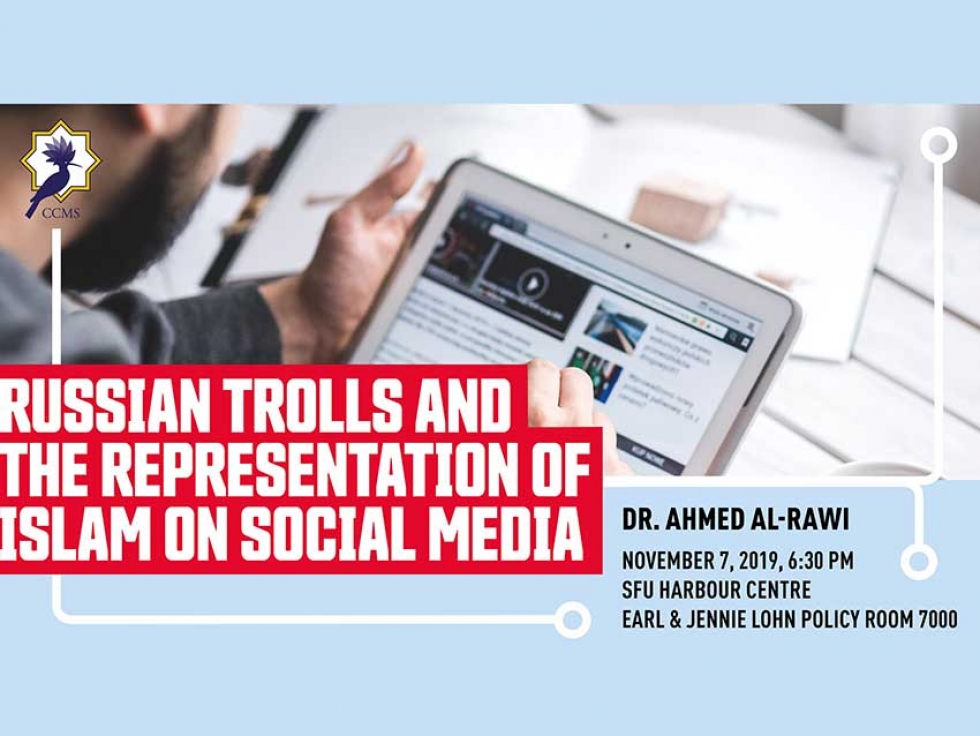 The Centre for Comparative Muslim Studies is hosting "Russian Trolls and the Representation of Islam on Social Media" at Simon Fraser University, in Vancouver, BC on November 7th (click here for event details).

Dr. Ahmed Al-Rawi is a professor with the Simon Fraser University, School of Communication and the Directory of the university's "Disinformation Project".

During this presentation, he will analyze social media datasets to understand the representation of Islam by Russian trolls during the 2016 US elections.

According to Centre for Comparative Muslim Studies, "The presentation provides an empirical understanding of the way Russian trolls used the issue of Islam on social media before and after the 2016 US elections. Three main datasets taken from Facebook, Instagram, and Twitter are analyzed, and the results indicate that Russian trolls frequently used Islam to microtarget a variety of audiences as the messages varied depending on the receivers’ backgrounds.

Despite the constant message variations, Russian trolls mostly connected Muslims and Islam to the Democrats, liberals, and social movements like Black Lives Matter. On the other hand, when conservative and Republican users are targeted, Islam is often treated highly negatively; however, when American Muslims are targeted, Islam is always framed in a positive way.
The study is situated within the broader discussion of microtargeting and disinformation and introduces the theoretical concept of microtargeted disinformation that has become an easily accessible political strategy due to the marketing features readily afforded by social media platforms."

Watch a short presentation by Dr. al-Rawi about fake news on Instagram (It may take a few moments for the video to load from YouTube)

About the Centre for Comparative Muslim Studies

The Centre for Comparative Muslim Studies (CCMS) has been established at Simon Fraser University to encourage the academic discussion and public understanding of the cultures and societies of Muslim peoples in the past and present. The Centre shifts the analysis from the notion of a single religious landscape defined by the religion of Islam to that of Muslims of different experiences and interpretations as agents in the construction of their societies and cultures. Website, Twitter, Facebook